I’ve decided to stop identifying birds. Yep you heard me right!  I’m not going to simply put a name on a bird anymore and get on to the next one. Nope. From now on I’m going to identify WITH the birds instead! Yes, by adding a simple four letter modifier I hope to enliven the conservation conversation by thinking more deeply about the birds I see.

Now does that mean that I’m going to dismiss with noting eye rings, wing bars, rump patches and such? No, of course not! I am genetically programmed to run feathered things through my mental ringer and call them by some proper name.  I am now and forever more will be a birder. So yes, I will continue to bird watch. But then the birds I watch deserve so much more than the names we've attached to them. They deserve more than just a glance and a tick mark.  They are each and every one miraculously evolved to do what they do—sing, flit, fly—and so I owe them more; much more.

Having the pleasure of being at the Biggest Week in American Birding again this year, I got to talk about “seeing beyond the bins” in a keynote address to urge birders to think about the birds they see as feathered marvels with stories to tell.  Kim and Kenn Kaufmann  press the conservation issue hard and so I felt at home. As an official  out of the closet “Angry Black Birder” I challenged us as a community of watchers to do more—to not just watch but to get outside of the “birdy box” and think about conservation and how both birds, people and other creatures all fit into the equation. 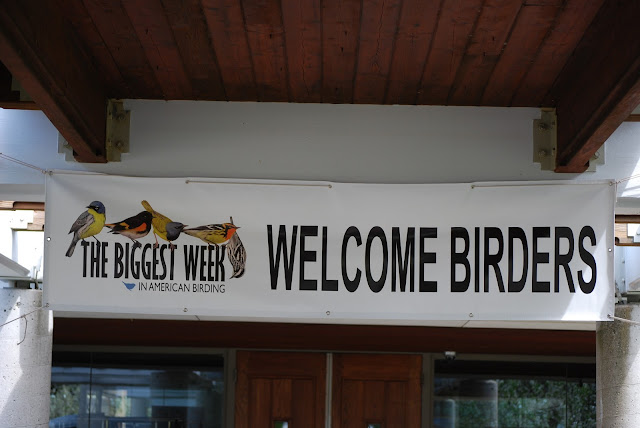 As throngs of us strolled along the boardwalk at Magee Marsh, thousands of high-powered  (and very costly) magnifiers were aimed at the astounding assortment of warblers, vireos, thrushes , tanagers and others that somehow made their way across the Gulf of Mexico to the shores of Lake Erie. 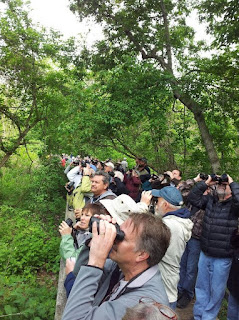 The legions we watched had amazingly made it to be there through gauntlets of predators, bad weather  and in spite of  the challenge of all the changes that humans put before them –cell towers, skyscrapers and such.  I wondered how many folks were identifying WITH the birds they were seeing and not just simply identifying them.

Consider the yellow warbler, Dendroica petechia (oh…I’m sorry—the fickle fingered gene jockeys have decided that they are now Setophaga petechia—my bad--geesh!). “Sweet -sweet –sweet- sweeter than sweet!”  They were everywhere singing that familiar song, flashing like little feathered flakes of sunshine in and out of the willows and low shrubs . They were in fact the first bird I saw through my binoculars at the Black Swamp Bird    Observatory Headquarters; kind of like a warbler welcoming committee. 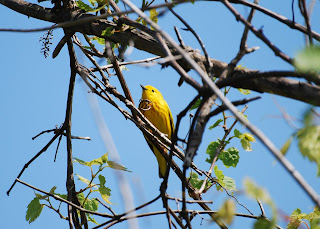 The little birds hold the distinction of being the most widespread warbler species in North America, ranging from the Alaskan outback  south to breed across most of the lower 48.  No one will deny the attraction of a yellow warbler. A lemon-yellow living being splashed with streaks of chestnut catches the eye. Combine that  with a distinctive “don’t ignore me” song  and a cute face and you have a bird that begs to be appreciated.   But do we really appreciate it—or any of the birds we see? I mean, they were EVERYWHERE!  I noticed people largely ignoring them.  After all there were  rarer and sexier things to be had—ticked off the list to build the numbers.  When an unusually cooperative mourning warbler made its way onto a vine-strewn and limb-fallen stage, hundreds were astounded that the desirable little grey-hooded skulker  seemed intent on actually being seen. Many of us waited for the show hoping for a glimpse.  I was among the awestruck and may have even drooled a bit as the bird wandered about, finally giving me the soak-em-up -brain-saturating looks I’d been wanting for years. 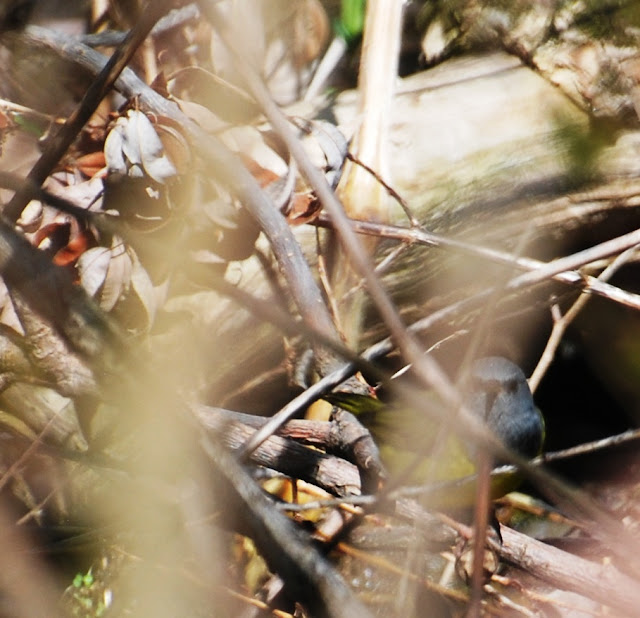 But the mourning warbler, the yellow warbler—any of the neotropical migrants that we were all there to see should strike us all with awe beyond just the name. After all, each and every one of them that graced our collective magnified fields of view had  somehow survived all that nature and humanity had thrown  at  them over the course of a year and thousands of miles of migration.  Amazing.

My SkyDawg Brother, Douglas Wayne Gray and I talked intensely about these connections as we lead folks through the urban parks of Toledo. Watching birders connect the birds to hemispheres, habitats and humans was an enriching thing. They seemed to appreciate the slower pace and stories we offered. Funny thing is we still “collected” a hearty list of birds but most we listed had something more to go along with the names. Our growing  connection to each other as brothers beyond the binoculars was strengthened through the birds. 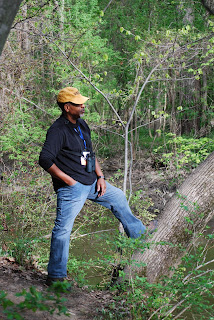 Do you ever take the time to watch a warbler, yellow or otherwise, throw back its little beaked head and belt out the story of its life?  Have you ever spied a scarlet tanager  setting a tree aflame and warbling the lore of its wanderings?  Sure, the songs  sound like clear-whistled phrases or “a robin with a sore throat” or however we want to describe them, but really the birds are telling stories. Each note is a declaration of that bird’s being.  Yes, there is territorial imperative and the advertisement for mates but I like to think that somewhere in that avian brain is some memory of the migration it is enduring. Perhaps there’s some pronouncement of all the hazards dodged along the way—a particularly persistent sharp-shinned hawk in the coastal scrub of some barrier Island; a cold rainy headwind; the wetland  that used to be; the mountain of windows that reflected the night sky perfectly but repelled some flock mates to fly no longer. Maybe all of that is somewhere, somehow wrapped up in that bird’s song we watch.

And so as I watch now, whether yellow’s at the Biggest Week with thousands of my fellow birders, or by my lonesome with Prothonotaries  in a blackwater swamp at Beidler Forest, I cannot simply and care-less-ly  just “identify” a bird anymore—by whatever name some taxonomist gives it.  I owe it to the birds I watch  to connect the story of its life to the privilege it gives me of seeing it.  The stories  of survival are worth considering and should move us to do more than just watch.  They  should connect us. Each one should push is to admire and actively  conserve with gratitude in the heart for each and every feathered thing.

Add  each bird’s story to the I.D. and be amazed.  Be careful  though-- a tear might find its way on  your list. 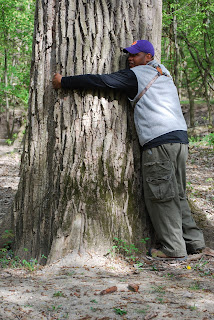