Birding While Black--Does it Really Matter?

Birding while black; it's not something that I simply think about, it's something that I live. A birder since the age of eight, I've always been the odd one out; the "rare" bird in the flock. Now approaching the fifty year mark faster than I care to admit, it wasn't until my late twenties that I began to encounter the other rare birders of color out there. It's unfortunate that it's become normal for me to be "that guy". Accepting it has been a challenge and at times a chore. On a few occasions it's been downright scary. Not that I haven't enjoyed the bird-filled days afield with my fair-faced friends, but being the only one at a meeting, or having the stares (real or perceived) linger on you just a little longer gets tiresome. Even more so, having my color factor into my thoughts as to where I might bird is a sad but true reality. Do I really want to chase Chukar into the same far flung areas that folks have set up to separate themselves from the "mongrelization" of America? Will the folks who live in places where black faces are uncommon (or not readily accepted) accept my crepuscular habits as something less suspicious than the search for secretive sparrows? Will the police really believe that I was just looking for the skulking Connecticut warbler that was reported in that shrubby corner of the park yesterday? 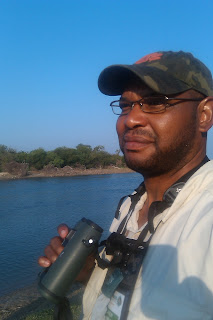 These have been just a few of the realities that I've lived and pondered over the years--almost on a daily basis. Perhaps, as some say, it's my own paranoia. Certainly with Obama in office all of the racism and hate has disappeared. African-Americans have arrived and so certainly among the largely liberal bastions of birders progress in the area of diversity has been made. Really?  Really? Guess again. I'm here to tell you that skin color still matters in 2011. Birding is among the "whitest" things a person can do. I just happen to be one of the few that adds a different hue to the mix. It's critical that along with biodiversity we think about the human component as something just as important. Linking humans of all hues to nature--through birds or otherwise, means that more will be engaged in trying to save it. Air, water, birds, trees--we all need them. That word has to get out.
This past weekend I had the distinct honor of being a panelist at the Focus on Diversity: Changing the Face of American Birding meeting at the Heinz National Wildlife Refuge in Philadelphia.  A long overdue effort, it finally took the courage and uncanny persistence of a New Jersey birder and middle school teacher to turn the talk into action.  Dave Magpiong is not a star in the birding world. That was until yesterday when his dream for what should be took a flying leap off of the ledge of potential into being.

Quicker than a Cooper’s Hawk with the comedic comeback, Dave is as deeply impassioned and purposeful a person as I’ve ever had the pleasure of knowing. Beyond his daily work as a teacher he founded an organization dedicated to getting kids out into nature with birds as the vehicle for doing so. His Fledgling Birder's Institute ( http://www.fledgingbirders.org/ ) is proof that one person can indeed make a huge difference.  I met Dave  for the first time at the Rio Grande Valley Birding Festival last November in Harlingen, Texas. There we and several other fine fellows including Dudley Edmondson, Douglas Wayne Gray, Jeremiah Alexander, Roy Rodriguez and Paul Baicich became the Sky Dawgs. (What are Sky Dawgs you might ask?  Well, they are ravens. The name was bestowed upon us by Dudley on a winter birding trip in Duluth and it has stuck.  It’s a complimentary thing I think as ravens are smart, playful, mischievous and mysterious birds that hold sway in the lore of many native cultures. Plus, they are black—like me!)

At Dave’s insistence, prodding, pleading, cursing and cajoling, we found ourselves together in a hotel room one night with a few beers (okay –more than a few), a pizza or two and a bag of pork rinds.  With the combination of nutritious food, wholesome drink and kind company, the recipe for something less than an intellectual discussion was primed. However, we gathered there not to exchange bird sightings or crude jokes (though both did slip into the conversation from time to time), our hearts and heads instead were ready to share our ideas about why diversity should matter to birders beyond their life lists. We all had anecdotes of racism on the birding trail—covert, overt and sometimes scary—to solidify why the discussion of diversity had to be enjoined by the almost lily white cadre of millions who call themselves birders.  The hours of talking were a boon to my soul as I learned from this group of extraordinary people why the face of American birding has to change. That night, after much laughter, some empathetic anger and maybe even a timid tear or two, we all committed ourselves to the effort—to making something happen beyond the talk that too many conservation organizations simply throw out as well-meaning politically correct double talk when pressed about why the lack of color is so prevalent among them.


Beyond that initial meeting, the rest of the week with my fellow Sky Dawgs was spent cruising the South Texas landscape, finding Aplomado falcons and other birdy treasures.  I’ve never laughed as hard as when we encountered the mother of all western diamondback rattlesnakes or thought we’d been locked behind the gates of Laguna Atascosa one evening (Stay tuned for the story!). Watching the sun set on rafts of redhead ducks was a bonding over birds I’ll never forget.  I’ve also not felt as close to a group of birding friends as when we shared our hearts and minds over the serious issue of how people matter too.  I must throw a huge debt of gratitude to Mary Gustafson who organizes the Rio Grande Valley Birding Festival and  made the very courageous decision to diversify the leader group at the  event last year. She doesn’t know it yet, but she is also one of the Sky Dawgs. I’ll teach her the double-secret handshake when I make my way down there in a couple of weeks.  I don’t think the others will mind! 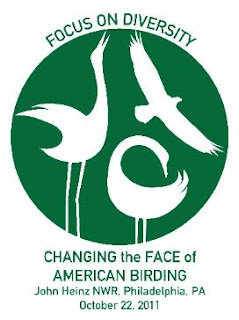 And so this past weekend, it happened.  The meeting Dave Magpiong dreamed of and we all talked about in that hotel room happened.  A room of folks—of all colors and persuasions-- filled a conference room at the John Heinz Refuge to capacity at the first Focus on Diversity: Changing the Face of American Birding meeting.  They listened, asked questions, net-worked and shared their heads and hearts as we had in that room that November night in Texas.  I felt honored to be among the number and humbled to serve on a couple of panels that spoke on the issues.  Private citizens and folks from several federal agencies (USFWS, USDA Forest Service), the American Birding Association, Audubon Together Green  and various other organizations showed up to support the cause. Folks as famous as Kenn Kaufman, John Robinson, Richard Crossley and Mamie Parks were there to lend their celebrity to the cause. Unfortunately, several other organizations that should have been there to support the cause weren’t. The absence of folks from such an important gathering who say they care about such things spoke volumes to perhaps a lack of true commitment to the cause and a deeper problem that needs to be addressed.  We’ll all be watching to see if they join the push to make the community of birders a more inclusive neighborhood. We’ll welcome all comers to the party.  It matters if we want to conserve birds, habitats and have generations of people who look like the future of America to do so. Their perceptions of nature, the issues and ultimately passion and commitment to protect birds, water, air, trees and all the natural things that matter to all regardless of color will be shaped now. 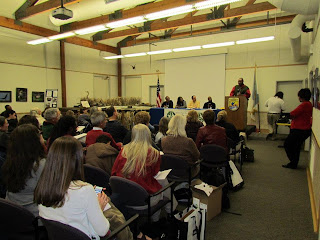 Regardless of the absence of some of the “big guns”, I think one conclusion was obvious from the gathering.  Changing the homogeneous face of American birding will start with the individual.  For each of us, reaching out to someone of a different hue, mode of thinking or simply different somehow than ourselves will go a long way to making birding look more like America.  And that my Dear Kindred Conservationists, matters as much as the birds.
Kudos to Dave and to my Sky Dawgs! Here's to the work ahead and the next adventure! And here's a hearty toast and tip of the hat to all those all who attended and committed to changing the face of American birding. Until we meet again! Good Birding!