I finally found my way into the deer woods a few days ago.  Going in cold one evening with no scouting and no idea what the deer folk were up to, I found the one man "hunt club" I manage overgrown with little to no sign that the whitetails were still on the place.  I sat anyway and watched the head high dog fennel wave like flags in the wind. Every so often, a falling leaf turned just so and gave the impression of something that could be, might be..but wasn't. 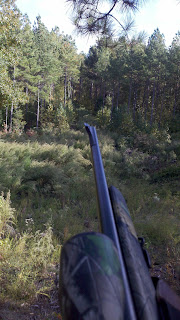 And so a few days later, I took my friend Mike with me to walk the place.  Our goal was to scout and see what was going on.  Amazingly, where there had been no sign, there were tracks, scrapes and rubs everywhere.  As we walked the tree-tunneled trail back through the property, we had to constantly step around scrapes and stop as deer wandered through the woods like ghosts on a mid-day haunt.  We were there to look and not hunt and so the deer haints wandered through with no worry. Mike, who seems to share a sixth and seventh sense with the deer folks, said the deer knew we weren't hunting them and so were relaxed. I thought about it and remembered that I use to smell the stress that killed my father when I was just fifteen.  It smelled like cold steel or rusting iron-metallic and lifeless but threatening or maybe fearful somehow  It is I think, what stopped his heart and killed him. In hindsight, I could understand how something with a sense of smell magnitudes more sensitive than a blood hound could smell the difference between stress-filled -predator- me and relaxed-observer-watcher- me.  I realized how relaxed I was watching and then how tense I often am when hunting. It was another lesson for the next time. It was like the line from one of my favorite poems "How to See Deer" by Phillip Booth; "Expect nothing always--Find your luck slowly". 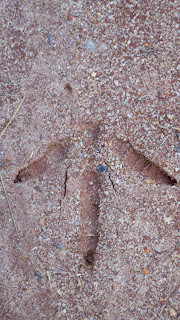 As we walked and whispered, Mike would suddenly break off of the trail to show me a rub line or show me how the little changes in elevation or breaks in cover pushed the whitetails this way or that. It seemed totally random at first but then there seemed to be a rhyme to the reasons he wandered. I saw things I'd never seen before and was both humbled and honored to have Mike's years of wood wisdom to learn from. 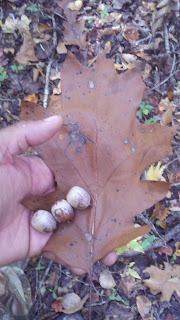 Mike has probably killed more deer than I have seen as he grew up hunting and trapping in the Spartanburg area.  A true naturalist he sometimes sends me text messages with pictures of interesting things like an armadillo that met its end on a Spartanburg highway far north of where an armadillo should be or a track that looks mysteriously like a large feline. Although Mike has trapped and hunted most of his life, he'd not brought a gun that day and seemed more intent on just looking that anything else. 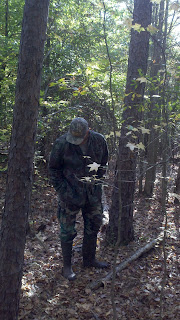 As we made our way through a magnificent hardwood stand and into the river bottom, it was clear that Mike was in his element and losing some of the anxiety he said he had been plaguing him for some time.  He stood on the bank of the river, transfixed and tranquil.  He told me his theory of how acorns respond to temperature changes, dropping with the warming sun as their little caps expand and contract. Deer hear dropping acorns he said, and knowing where they warm up first is a clue to where the whitetails might be.  It made sense and was just another one of many tidbits that Mike let slip out in the slow southern drawl that was born on a Spartanburg mill hill. With Mike, acorns are "akerns" and the "I's in words like knife and life are drawn out to the full value of the vowel. His slow, deliberate walk, random wandering and gravely voice were soothing thing to me and I slowly began to see some things through Mike's eyes. I slowed down and began to trust feelings that whispered to me without reason. I suppose it was the same wood's muse that has been speaking to Mike for most of his 56 years. 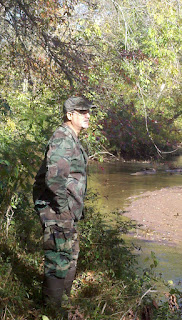 Mike and I parted ways that day over a cheap gas station hot dog and a handshake promising to get together again. He seemed reluctant to part ways almost as if he would've rather returned to the woods to walk with the deer. I felt much the same way but had to return to the "real" world of appointments, emails and ringing phones. All the lessons from that day's class in the woods went with me though.

And so a couple of days after my lessons with my woods wise Spartanburg friend, I entered the woods again to practice what I'd learned.  Instead of opting for the easy stand at the front of the property, I decided to track through the woods back to the bottom where we'd found some pretty promising buck sign--a huge rub (that doesn't necessarily mean big deer but could) and lots of fresh scrapes in a place dripping with acorns.  Mike had suggested I hunt there the next time. I hiked through the woods--crunchy with leaves and dry litter but did so without pushing any deer. There were no snorts, white flags or pounding of hooves. I even passed by a squirrel without arousing a scold or tail shake.  I was intent on my path but relaxed in doing so.  Perhaps the lessons were working. 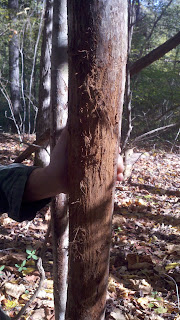 I climbed into my ladder stand a little after shooting light and was surrounded by the golden glow of shagbarksweetgums and few blackgum here and there spiced the scene with more vivid reds and purples. The wind picked up with the  sun that was struggling to rise behind the clouds that seemed intent on staying for the day. Soon leaves were falling in a storm. A few crows called to greet the morning and a Carolina Wren chattered noisily as if irritated at having to leave whatever cave-like hole it had found refuge in for the night.  After the first few squirrels fooled me into thinking that something with hooves was headed my way, I relaxed into the morning.  With the wind so persistent, I knew that the likelihood of seeing deer was lessened.  The wind seems to make them even more nervous--more wary of the random sounds and swirling scents that are less predictable in the maelstrom. Smarter than me, many of them probably stayed in their leafy, briary beds, chewing cud from a predawn breakfast  and wrinkling their noses to catch whatever news the wind brought them. 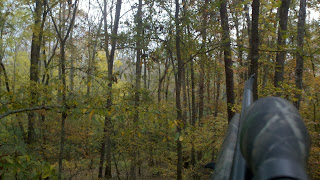 And so I sat anyway, enjoying the overcast morning, thinking of nothing but where I was and the blessing of being there. I wrote a couple of poems, snapped a picture or two and let my heartbeat slip to slacking and my blood pressure drop below stressed.


Acorns falling down like rain
Oak leaves dying too
Peace flows like water through me
No deer does not mean an unsuccessful hunt. It simply means that more lessons need to be learned and the luck needs to be with you. With the river gurgling past not more than fifty yards from me, the leaf storm spinning all around and the lisps of birds awakening to the day,  I had expected nothing and found everything. 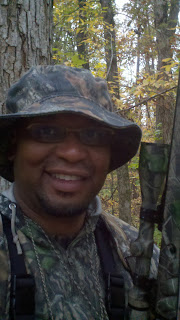 The deer will come later with more schooling.

Peace and Good Hunting,
Drew
Posted by J. Drew Lanham at 11:41 AM